Art cage 1-81 is a cycle of 81 site-specific installations operating with both structural and symbolic elements developed throughout Martychowiec’s practice. The installations, on one hand, construct a ‘Great Metaphor’ of the human condition entangled within the structures of history and power and on the other provide a sort of key to the artist’s practice (further developing some of its narratives).

Each installation is unique, assigned to a specific location (chosen locations are set throughout the world) and numbered (e.g. Art cage #1, Art cage #2, etc.). All installations share a uniformed ‘frame’ (glass and aluminium construction representing an enclosed yet open space) and a unique text made in green neon.

I
The daily questions. The daily conversations.

The daily questions is an ongoing project consisting of neon questions of historical relevance in the Gassetian’s sense (that means the questions are concerned both with the notions of history and with the existential notions of ‘being’). These questions are always directed to an individual, e.g. ‘How far can you see?’, ‘Where does your heart belong?’, etc. The questions made between 2013 and 2017 as the artist stated have ‘universal qualities’ and create a sort of ‘individual existential fundament’. However, an individual cannot live solely within the isolation of his/her ego. Social thought in general, and individuals’ ideas in particular, fail to develop and expand within the solipsistic vacuum of the ‘I’ by their very essence. As a being of the social world, the individual and his ideas are influenced by the historical context and the very social world within which they emerged, and, similarly, formed by the past.
And so later on in his practice, the artist turns from ‘foundation building’ questions to conversations so that the constructed foundation can be tested to withstand the external forces. Thus the texts placed within these installations have, in most cases, the form of dialogues. These dialogues also operate with symbolic, referential and metaphorical elements which can found throughout the artist’s practice. In these conversations, the mentioned elements occur in wider social, political or historical contexts. After all, even though the series of 81 installations is meant to function as a ‘Great historical Metaphor’, it cannot become fully independent from the historical process it is part of.

II
The Great Metaphor. Reality and its 81 chapters.

Journey to the West, a classical Chinese epic novel, tells a story of a monk who receives summons to recover a divine scripture from the far West (India). The monk and his companions thus go on a journey on which 81 trials await. Each of the trials constitutes a different element of society and the individual man who is part of it. Hence, it comes to no surprise overcoming all the trials results in the monk’s enlightenment. Journey to the West presents what could be called a Great Metaphor of human reality, where reality should be understood in the sense of Ortega y Gasset’s historiosophical philosophy.

In 1925 Gasset has directed his thinking towards the possibility of a ‘systematic phenomenological thinking’.
‘Ortega both viewed human life as embodying an essentially historical process within which the realm of human reality is perceived and understood. Historical knowledge is found in the flow of the historical process, and knowledge of this very process provides an essential understanding of human reality. […] history, for Ortega, embodies the “inexorable chain” of human experiences and is constituted by the synthetic function of “historical reason”’
(Stanford Encyclopaedia of Philosophy)

A journey is a classical metaphor for man’s life. The 81 trials are not conducted throughout scope of a specific and fixed timeframe but throughout the whole of the journey, or to be precise, the journey is only over, when the last trial is completed (and so 81 represents a sort of universal completeness). This points to life and man’s reality as a process which cannot be grasped through an instance but rather through a phenomenological deciphering of a system called history. ‘The great metaphor’ is nothing else than a metaphor of human life and a means of describing contemporary reality by the artist who constructs it throughout the time of his life as a representation of his ‘historical’ life.
The artist constructs a work which, once again, can be fully taken at neither one time nor one place. A lot is asked of the spectator, who would indeed need to go on a sort of pilgrimage throughout the world to visit each of the ‘Art Cage’ sites to truly participate in the work’s constructed reality. However, one could say, what the work has to offer, it can only offer precisely through this construction.

Even the modern ‘revolutions’ (in culture, art) are necessarily built on a negation of the preceding systems. It is their continuation and cannot be understood without the context of history, in the same way as a work of art cannot be understood without the context of the whole practice of the artist and the work of the artists before. Thus our reality is a historical reality. History and reality are systems constructed through a specific phenomenological framework and art, both in terms of its practice and interpretation, is no different. The system constructed for this series of installations bears analogy to the very framework and operates through principles based on time and distance.

The experience of the installations can be simultaneously processed on several levels in relation to the one ‘of the present’. The order of these experiences is by its historical nature, and so by being determined by each individual journey, unique.

The format of pilgrimage offered exactly that: its destinations were predetermined, the order of each visit was not important as long as the specific locations were reached. Construction of this kind of framework made the pilgrimage a mean of allowing an individual to better understand the historical nature of reality. Of course, despite the lack of (religious) faith of the modern man, he/she travels, almost insatiably, desperately pursuing these structures. However, the system requires predetermined coordinates. They cannot be random, even if there is complete freedom in everything else. Without a ‘frame’ to provide a limitation to a system no idea, no reality can be contained.

IV
What is an Apparatus – (virtual) realities, freedom, institution

The term ‘art cage’ is rooted in another of Martychowiec’s projects – Josephine. Josephine is a work of art in the form of a living rabbit. A large number of other works, notes and objects have been made around this work, the whole paradigm has been created to facilitate and ensure its functioning as such. In 2017 the artist filmed the rabbit in its open cage for 8 hours, throughout which time the rabbit never left its enclosure (Empire). The rabbit is a work of art so naturally, the cage containing this art became the ‘art cage’.
If one assumes a systemic quality of history and art, then it would be also correct to assume art has an intrinsic virtual quality.

‘History is virtually to convert that which has already passed into that which is present. For this reason—and not only metaphorically—history is to relive the past. And as living is nothing else but actuality and the present, we have to transmigrate from the actuality and the present which are ours to those of the past, looking at them not from without, not as living experiences which have been, but as those which persist in being’.
(Ortega y Gasset, J. Obras Completas. Vol. V: 40. Madrid: Revista de Occidente, 1964).

The intrinsic quality of the classical artistic practice is the pursuit of freedom, whatever it may be. After all, the artist leaves behind material objects which end up being freed from his own historical reality. And thus, at first, it might seem contradictory to say art has a virtual quality. However, art can only function within a system constructed to house it, within a ‘frame’ of some sort. Post-modern artists have, after all, specialised in remaking that frame precisely, over and over. The art cage represented in this installation cycle through a glass metal structure, becomes a metaphor for many things: it represents the space for art, and so a format into which artist does/produces whatever he will; established art movements/ideas which influence the artist and reading of his/her work; and then most importantly an institution with all its functions and power capacities, which probably contains all the preceding elements. For the artist, who pursues freedom through art, it is impossible to materialise any of his/her DOs without this limitation symbolised by the art cage.

And so presented to a spectator is a symbolic space, which always remains locked. Contemporary keyhole does not allow peeking, which is nevertheless unnecessary as the ‘frame’ offers full transparency. The ‘discourse’ represented through a text of a conversation in neon light is placed inside. Its light radiates through the glass panels in the wall and illuminates whatever or whoever might be outside. The discourse which takes place uninterrupted in the ‘cage’ carries the capacity to influence the outside, but does not allow unauthorised interference. That is the historical apparatus and it is so that man, time, thought and society are disclosed in reality as they are essentially historical. 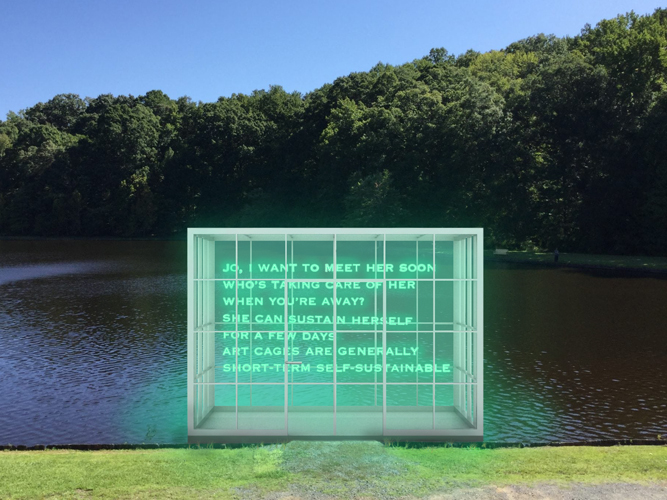 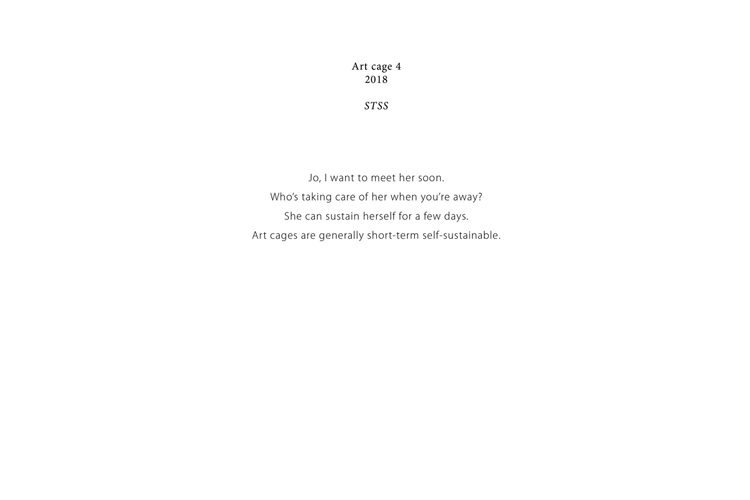 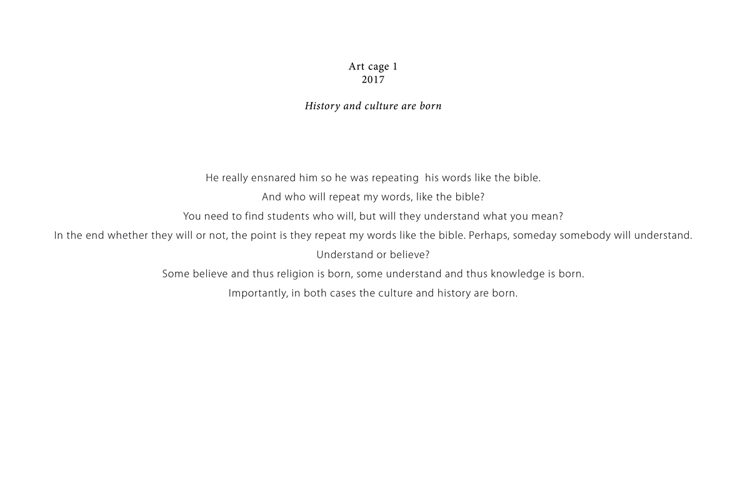 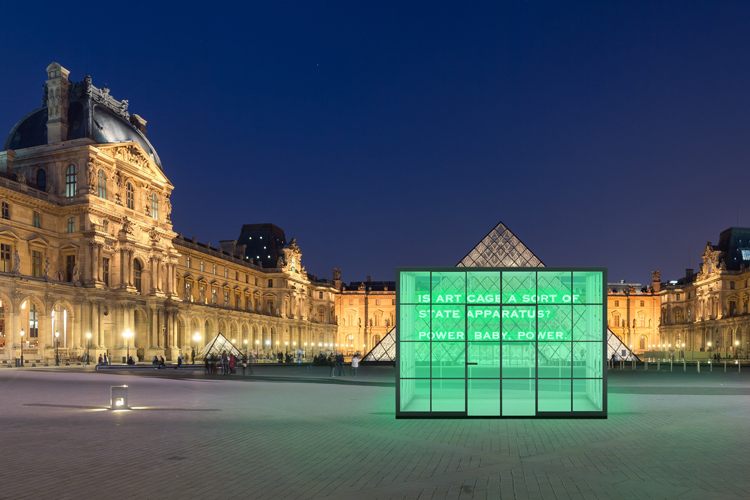 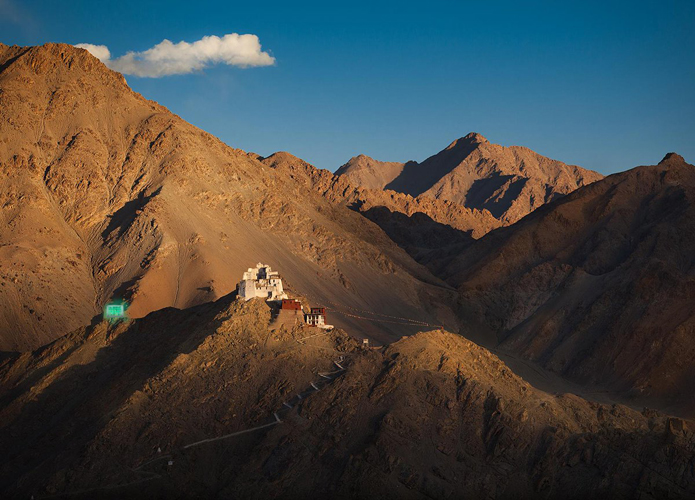 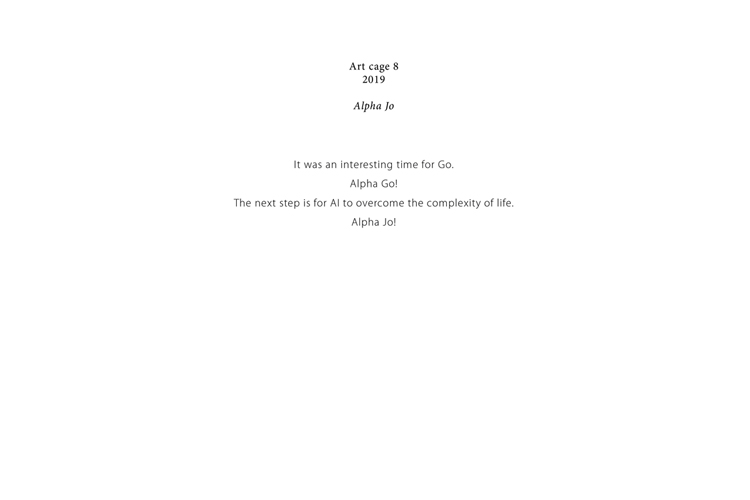 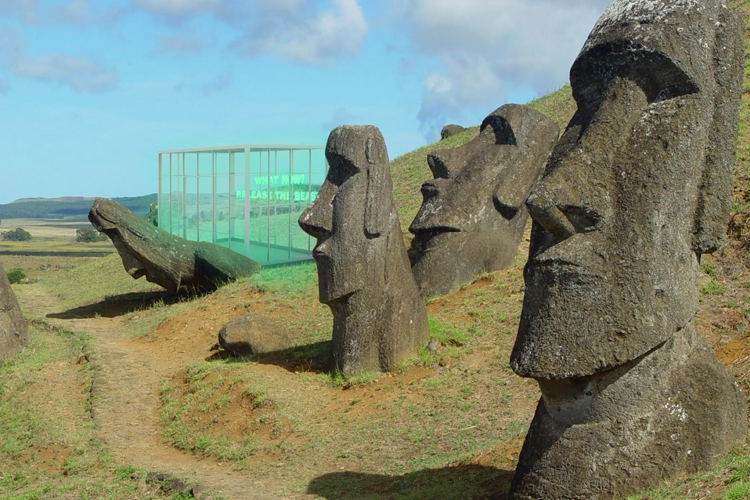 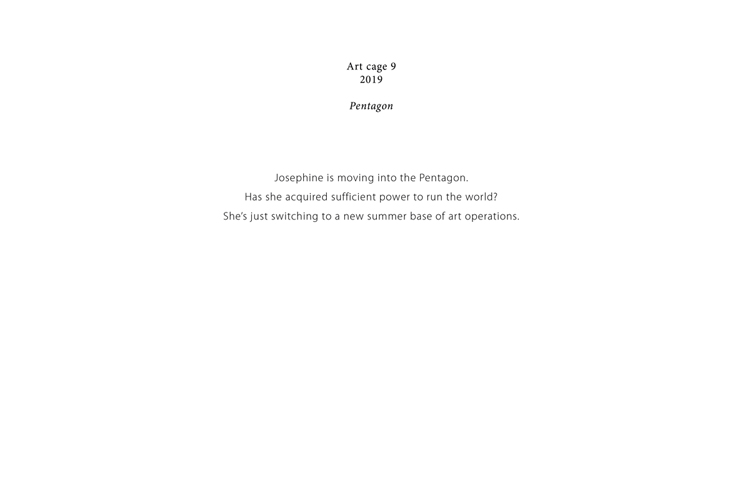