Where Do We Come From? Where Are We Now? W…

It is usual for a visitor of a gallery or a museum to come with an expectation or intention to ‘see something’. And thus, visiting the installation Where Do We Come From? Where Are We Now? Where Are We Going? might offer a surprise, for the space of the gallery remains thoroughly filled with thick fog making it impossible to see anything but oneself.

This work, however, is anything but just a gimmick on an empirical experience. Essentially, it immerses its visitor in a historical experience in every possible meaning of the term.

Its title has been taken from Gauguin’s acclaimed work, one which was made during the time of a personal existential crisis of the artist. However, Martychowiec, rather than personal, is concerned with the crisis encompassing societies, one which is historical in its nature and historic in its significance. And thus, one of the questions in the original title has been replaced with, perhaps, the most valid one: Where are we now?

The installation is a meeting point for many ideas and moments in history, which it might be easier to understand under considerations of the past works of the artist and his use of the fog/smoke motif which took on various metaphorical roles.

One of the earliest projects of Martychowiec Destination: The Magic Mountain explored the role of memory and experience in formation of identity. A non-existent place remembered from the past emerges as buried in the mist of memory and time in a series of large-format photographs.

Another project, executed shortly after, Vanito Vanitas reflected on the existential condition of the post-modernity man. The artist made use of the motif from the historical painting – vanitas – which in the original Hebrew version of the Old Testament translates as vapour/smoke.

Later works placed smoke within the personal mythology of the artist.
In Everything about the contemporary is panda (2016) words of Marcel Duchamp reading his The creative act echo from the abyss of a bin in the shape of a panda. It is important to understand the panda within the artist’s language is meant to function as a representation of the contemporary man.
Thus, another work from 2020 is using exactly the same, but smaller, bin. However, this time no ‘wise words’ but smoke of incense find its source from within (Every work of art is the child of its age and, in many cases, the mother of our emotions).

The preceding generations were trying to apply reason to understand the world of their vital experience (which was inseparably corporeal and spiritual). But the child of these generations inherited a broken unity of this experience, now being purely biological on one hand and social, cultural and political on the other. Thus, the smoke of incense escapes from the monstrous jaws of the panda, as if in an attempt to purify and free itself from these new aspects of vitality through fire (as the smoke disappears but the smell of incense remains throughout the space).

In Marcel Duchamp smoking cigar in the museum (2017) the artist reenacted the smoke of a cigar Duchamp was smoking during his talk at Walker Art Center in 1965. The smoke here inspires the discussion on the nature of the apparatus – institution and power.
Let us, however, return to the installation in question. Mist and smoke were commonly represented in the romantic imagery. Art of the 19th century was a response of the artists to the changing paradigms of the world – the new paradigm of freedom with the introduction of wage labour and the new paradigm of nature – with technological and industrial progress.

When a contemporary viewer sees Victorian photographs of London buried in the ‘romantic’ fog, he/she might not realise it is rather an industrial fog, for London was filled with smog from the burning of the coal. And so it is at that time that we began our journey towards the precipice we find ourselves at with the world facing the environmental crisis among some others.

When talking of fog and the 19th century there are many more examples to give, like – Wanderer above the Sea of Fog by C.D. Friedrich, an image which some years later might have inspired the Great improvisation in Kordian by J. Slowacki. In the drama, Kordian disillusioned with life travels throughout Europe, unsuccessful in finding remedy to the crises of his time. At some point, he decided to climb to the peak of Mont Blanc, and it is there, where he found his way and raison d’etre. From the top of the mountain, one might see the world in its entirety, but then, this world remains covered with an impenetrable fog. And thus, one realises, when in the world, one must move throughout, struggle, as the way remains obscured despite all the technological progress, supposedly allowing us to understand the world better.

And so, the visitor finds him/herself isolated in this fog of history, i.e. the fog of the present and is left alone to answer these three crucial questions. 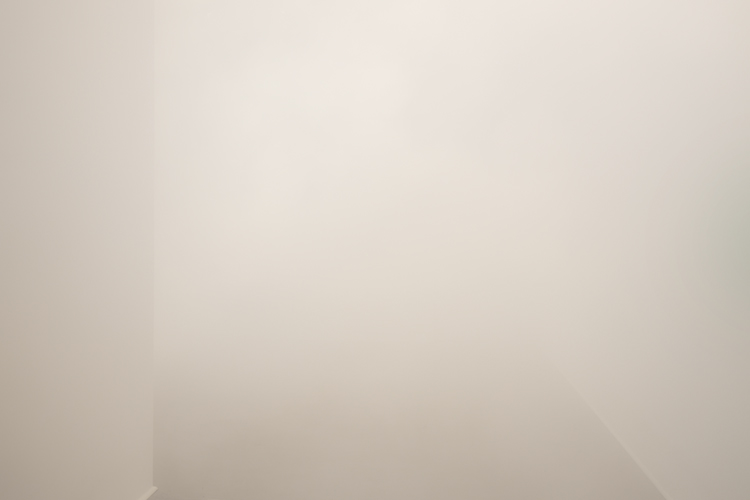