Sur la plage is a work developed out of 2 predominant narratives in Martychowiec’s oeuvre. One is that of a crystal beach metaphorically bringing to the present the slogan of 1968 student protests – ‘Sous les pavés la plage’ and the other of a panda as a representation of a contemporary human being.

The work is addressing a few matters. Both pandas placed on this metaphorical beach cover their bodies and as such further establish their humanness (only man is conscious of his/her nudity and so covers particular parts of his/her body – it is customary for women to cover their nipples, but it is not for men).

The panda in the crystal pile (like a child being buried in the sand) is also covered. Not with clothing but with a symbolic element which in the artist’s language among a few other things represents modernisation, institutionalisation and consumerism of the contemporary societies.

The question of man, and nudity, becomes connected with the development of the various apparatuses. The stronger form the ‘institutionalisation’ takes, the stronger the ‘covering’ is required of the members of society.

However, nudity is also to be understood metaphorically. The panda represents an empty existence, or what Agamben refers to as a bare life.  Bare life requires being covered in the same way as bare skin does. In ancient Latin the word ‘persona’ signified a mask, thus also a form of covering.

This installation is then placed in the context of two neon works:

the historic level is placed on the height of the panda and is borrowing two terms developed by Spanish philosopher José Ortega y Gasset: ‘the historical level’, which to Gasset represented certain averages of the standards of living, education, work and leisure opportunities, and perhaps more importantly ‘the height of the times’ which indicated how we, as contemporary people position ourselves in the perspective of the historical process. Do we consider being at the pinnacle of ‘civilisation’ or do we look with certain nostalgia to what was in the past? The historic level becomes the scope of the current possibility of growth of the contemporary man and in the installation’s symbolic space becomes inextricable with the panda’s height.

The contemporary man deprived of the spiritual aspect of his/her vital experience is left with no choice but to cover that nudity of the empty existence, as the panda does: with clothes, in other words, superficial forms making him/her more ‘human’-like; or with crystals – an ever insatiable ‘consumption’ which can neither be halted, bring any fulfilment or nurture growth, and becuase of its pending character, never offer a moment of reflection.

Being entangled from one side within the apparatuses of power and from the other in the possibility of leading a panda-like existence, What is left to us? 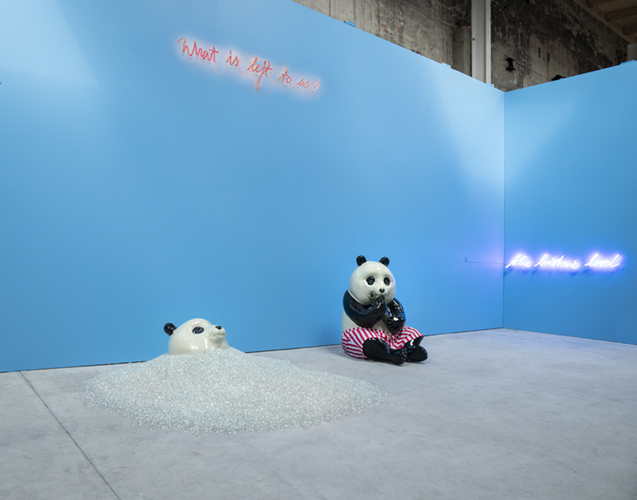