Suffer nothing to remain outside

Michal Martychowiec
Suffer nothing to remain outside

It is usual for a visitor of a gallery or a museum to come with an expectation to ‘see something’. And thus, a visit to the exhibition Suffer nothing to remain outside might offer a surprise, for the space of the gallery remains thoroughly filled with thick fog making it impossible to see anything but oneself. The immersive installation Where Do We Come From? Where Are We Now? Where Are We Going?, however, is anything but just a gimmick on an empirical experience. Its title has been taken from Gauguin’s acclaimed work, one which was made during the time of a personal existential crisis of the artist. However, Martychowiec, rather than personal, is concerned with the crisis encompassing societies, one which is historical in its nature and historic in its significance. And thus, one of the questions in the original title has been replaced with, perhaps, the most valid one: Where are we now?

Essentially, the installation immerses its visitor in a historical experience in every possible meaning of the term, and becomes a meeting point for many moments of history as it might be suggested by the neon All is history placed in the front window of the space.

Fog was commonly represented in the romantic imagery. Art of the 19th century was a response of the artists to the changing paradigms of the world – the new paradigm of freedom with the introduction of wage labour and the new paradigm of nature – with technological and industrial progress.

A contemporary viewer who sees Victorian photographs of London buried in the ‘romantic’ fog might not realise it is rather an industrial fog, for London was filled with smog from the burning of the coal. And so it is at that time that we began our journey towards the precipice we find ourselves at with the world facing the environmental crises among many others.

When talking of fog and the 19th century there are many more examples to give, like – Wanderer above the Sea of Fog by C.D. Friedrich, an image which some years later might have inspired the Great improvisation in Kordian by J. Slowacki. In the drama, Kordian disillusioned with life travels throughout Europe, unsuccessful in finding remedy to the crises of his time. At some point, he decides to climb to the peak of Mont Blanc, and it is there, where he fings his way and raison d’etre. From the top of the mountain, one might see the world in its entirety, but then, this world remains covered with an impenetrable fog. And thus, one realises, when in the world, one must move throughout, struggle, as the way remains obscured despite all the technological progress, supposedly allowing us to understand the world better.

And so, the visitor finds him/herself isolated in this fog of history, i.e. the fog of the present and is left alone to answer these three crucial questions. Moving deeper into the gallery space one reaches stairs leading downstairs. Underneath the ‘fog of the world’ two films from a trilogy by Martychowiec are being projected. The images of the ground of a Japanese temple and sort of ‘ruins’ spreading across the globe are combined with historical quotations (music, text) throughout the two films.

The shrine to summon the souls opens this trilogy cycle of films investigating and constructing an ongoing reinterpretation of history using symbolic locations, frameworks of historiography, historical, political, and sociological ideologies, and various cultural relics. Blossoming cherry trees in the gardens surrounding Yasukuni Shrine (The Shrine to Summon the Souls) in Tokyo offer a spectacle of fugitive beauty and an intense experience of time as if passing moments were visible with every tiny white petal falling on stones paving the paths between the trees. It is a special moment for a meeting of many narratives of the past and the present seemingly out of time, where the living walk alike the absent spirits. The temple is consecrated to the heroes of the country, among them controversial ones from the period of the Second World War. The memory is being aestheticized, but under the surface of a charming landscape, the violence, contempt, rage and hate due to a failure of the struggle for freedom is echoed by a human voice. The video uses fragments of the original text and music of Pasolini’s film La Rabbia from 1963. The image alternates with three kinds of sequences of long shots of trees and sky, medium shots showing empty paths or feet of passing people and close-ups of ground looking like an abstract composition. Through the musical layer as well as through the spoken passages the Rage is summoned like a spirit accompanying a new film material (50 years later), which this time does not document the living, but shows a garden as a receptacle of an uneasy memory and the only violence in the image is in the cuts between shots. Instead of archival footage of uprisings and faces of people fighting for their causes used by Pasolini in La rabbia, in the video, there are faceless images of a nearly abstract space dominated by nature and emptiness that reveal a vulnerable beauty and unexplained common tragedy of history.

The more universal ideas in the first film are developed further in The fire and the rose are one. The film is constructed, similarly to The shrine to summon the souls, with two parallel narratives. One is the text of T. S. Elliot’s Four Quartets which suggests on many levels means of reading of the visual part which presents three historically symbolic sites: former site of Pruit-Igoe social housing project in St. Louis, Ordos City in Inner Mongolia and ruins of the Greek village of Levissi located now at the Turkish coast. The three locations present historically symbolic ruins and each facilitates a new perspective in consideration to our present circumstances.

The film begins in St Louis, which like many major American cities in the early 50s was facing an increasing number of migrants from the rural areas. To solve the housing problem the city council decided to construct a housing project following Le Corbusier’s Athens Charter. A complex of 11-storey high towers was completed in 1956. The project offered family flats with facilities many of its inhabitants-to-be never had had access to: modern bathrooms and kitchens, laundry rooms and other communal areas. Despite that the project started declining only a few years later. The 60s produced a new landscape, the American Dream was not in accord with the idea of community, it propagated an isolated individual whose life concentrated around consumption (something young hippies later on would be vividly opposing). Inhabitants of the cities would move to the suburbs and a housing solution was no longer necessary. By mid 60s the complex declined. It was occupied only in a third and it became dangerous and crime-infested; it was said police would not even dare to arrive for interventions. Between 1972 and 1976 the whole complex (apart from the school and chapel) were demolished. What followed was a neoliberal period of manufacturing outsourcing which further contributed to the region’s and city’s decline. St Louis was not to recover. Up to this day, in the centre of the city, a quarter of abandoned rubble of Pruitt-Igoe is buried underneath a wild park. The spectator is invited to follow the narrator into a ‘garden’, where many narratives of the past and present meet.

From Missouri we move to Inner-Mongolia and the City of Ordos, which several years ago was listed among the so called ‘Ghost Cities’ by the Western Media. These abandoned and ruined cities presented in pictures, were in most cases simply projects-in-progress, and so essentially construction sites, as the central government invested in building a 2 mln inhabitants conglomerates over only a couple of years, a scale not really familiar to the Western audiences. The common commentary followed a typical neoliberal idea, similarly assigned to Pruit-Igoe – a ‘crazy utopian vision’, which could not possibly have succeeded. By 2017 the city was already inhabited in 30%. Nevertheless, Ordos still remains relatively empty in many parts. On its account several rushed building projects were undertaken and many had to be abandoned. In the middle, the film moves on to an abandoned Greek village on the Turkish coast. But from that point on the film will move back and forth from Ordos to Levissi, then briefly back to Ordos to then conclude back at the seaside.

Ordos city became a middle point of the film, because it is a ‘ruin’ of a different sort than the two others. It is also a place where one could say issues of urban planning (represented by Pruitt-Igoe) and social and racial planning (like in the case of Levissi) meet. It is also the place in-between past and future, as the narration of the text moves through time and memory. The feeling of desolation also brings a different sense of uneasiness. The issue of cultural minorities in China and the policies of the Central Government – ‘The people of the plains bring culture and wealth to those poor inhabitants of the steppes.’ The locals might be willing to accept the tempting offer, the cost of which we might yet to learn. The film concludes at a different kind of ‘ghost town’ – ruins of Levissi located in the historic region of Lycia, now in Turkey. Prior to 1922, the town was solely inhabited by the Greek Christian population. In 1914 the Ottoman authorities began persecution of the local Greeks as a result of larger plans of ethnic cleansing. For the following 8 years the Greeks were tortured and murdered. What is now recognised as genocide of the Ottoman Greeks ended in 1922 with deportations of the small number of remaining Greek population.

The arrangement of works in the space is symbolic. If the upper floor is meant to represent a metaphor of the present world, the lower floor signifies certain foundation or ground on which this world has been constructed. Like in a Romantic painting, the ruins are covered with fog, the spectator can only imagine what histories have led them to where we are now. 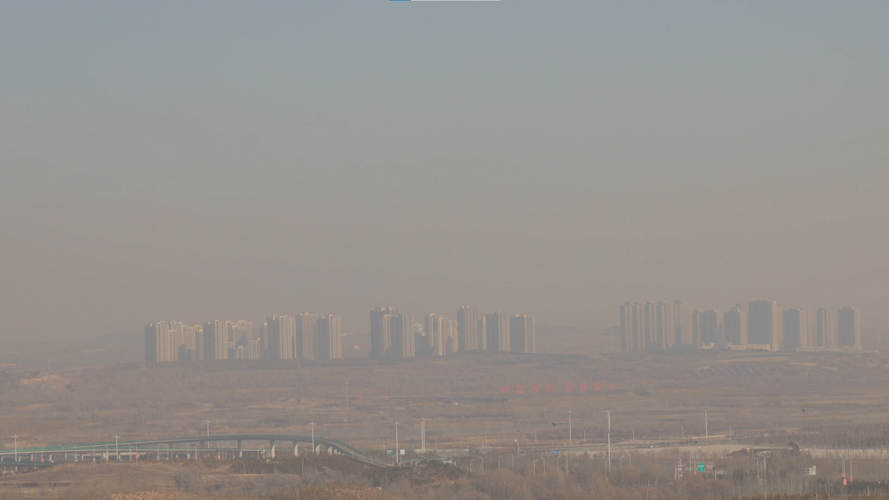