Sous les pavés, la plage! (Under the cobblestones, the beach!) was one of the slogans used in France’s 1968. It expressed the desire that beneath the city which had been hardened by stone, there be the freedom of the beach (represented by the sand in which the paving stones were placed).

Beneath this poetic phrase of the past lays actual brutality and anger of the French fighters for freedom and all the pre-1968 ideals which have never quite played out.

‘Tutto inizio in un giorno di violenza’ (It all began on the day of violence) is the first line of the contemporary paraphrase of The Illiad written by Alessandro Baricco during the time of the war in Afghanistan. This phrase in the direct contemporary language sums up the problematics of the original story, for The Illiad (the very first book of the Western civilisation) does not begin with chapters of love between Helen and Paris, but with the raging war.

The two works originally created to function as part of other projects, now together, construct an even more complex narrative. This is the typical method the artist takes in constant re-developing his work. At first, he creates mix media installations concentrated on more narrow specific ideas, to then broaden their significance through a compilation of several narratives (chosen elements of other individual projects) into a multi-parallel one. The newly created significance of individual artworks and its symbolic functioning throughout the artist’s oeuvre both have to be considered. The work which was to be looked at from the front in another installation might reappear turned with its back and one could say it is thus developed through with the quality which Feuerbach once called Entwicklungsfähigkeit – something holding a capacity to be developed over and over.

The exhibition is constructed through an intricate study of historic frameworks: the poetic title somehow provides us with, as in most cases, romanticised image of history, but so is the visual language: the blue walls, the orange neon, the beach chair and umbrella, they all bring an image of some sort of vintage holiday advertising, only crystals which replaced the sand bring us closer to the contemporary, for in the language of contemporary media nothing is allowed to be real, i.e. imperfect, and can there be a less imperfect replacement for sand, if not the crystal which, incidentally, is made of it. Of course, crystal in a way represents industrial revolution too, the phenomenon which shaped the society to give birth to modernity.

The above analysis as much as descriptive doesn’t tackle, however, the actual content of the work which has a double basis: one is that of analysis of history, a turning point of several narratives which 1968 represents, but most importantly the two ever-present aspects of human civilisation: the violence and freedom. The latter narrative is drawn starting with The Iliad: with the sensible women who represent in a way enlightenment and reason, for they always cry for peace and the fighting to cease, and with the romantic men who despite each time postponing their clashes, calling forth names of their fathers and forefathers, are willingly going into the fray to sacrifice their lives and achieve the freedom of immortalisation, in other words become part of the history. In 1968 striving for different ideals of peace and freedom, ultimately resulted in violence too. One could admit the students craved revolution without clearly proclaimed ideals, after all, revolutionaries too, take their place in history, their position being determined on the actual success of their violent endeavour.

Sous les pavés, la plage! commits a certain reversal of the meaning. At the level zero there is the concrete, that’s the point of perspective, under the pavement should be the sand of the beach, symbolising freedom and nature. The sand is thus taken from underneath and placed on the top, with such difference the sand is no longer the representative of nature, but an industrially produced material ( the place taken by concrete in the original metaphor) and thus we end up with crystal, common and without value like the sand in fact, yet for some strange reason considered valuable.

We may find this new beach very beautiful, it certainly attracts us. It perhaps reminds of the peaceful holiday time we spent at the seaside but here is where two discomforts might occur (which nevertheless would be ignored while the blink blinds and draws us): 1. the crystal beach on the concrete as much as beautiful is even more artificial, but the true artifice is in 2. the neon, which points to the violence, violence which lays at the base of every beginning, but which in this case cannot be clearly seen under the cover of beauty. This contemporary violence is docile, it lays in the act of creating a docile pacified man who will devote himself to perhaps attractive, yet fruitless and passive activity.

In a sense, both works inform one another. As the violence is not apparent at the crystal beach so the artificial is not visible on the surface when one considers the neon work. This quality of the artificial though plays a crucial role in the project Empty room of which the neon is the opening work. In there, however, the violence is placed in the existential context of contemporary communication, drawing the story throughout the digital, AI, history, and the physical. 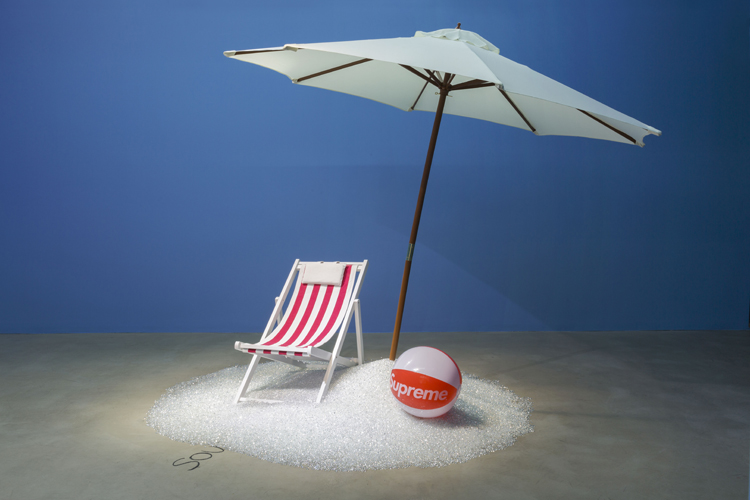 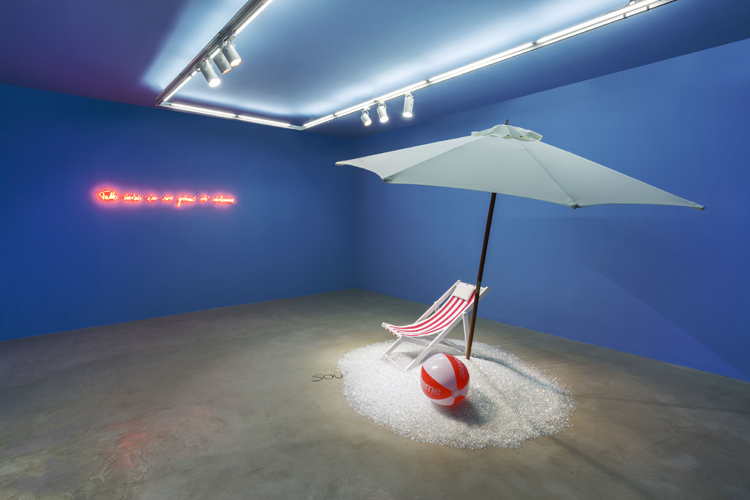