Journey to the West II – Winter kept us warm

Michal Martychowiec
Journey to the West

Despite its modest size and at first sight literality of combination of elements, the exhibition offers, as often in the case Martychowiec, a complexity of a ciphered hermeneutic construction. It combines references to various elements scattered not only within its own frame but most importantly within the art history and the complex practice of the artist. The spectator is invited, or perhaps challenged, with the possibility of a reading. However, how should one approach, the hero of this story – Josephine – a black and white rabbit whom the artist draws as one who was spared the fate Beuys’s hare met in the process of art-making?

The exhibition space is clearly divided into two independent counter-parts: upper and lower. The upper part being dedicated to Josephine and the lower, in the basement, being a re-enactment of an installation from 2016. Originally, Josephine was one of the rabbits hopping away in the gallery, as part of this work. It is crucial to consider the installation a different work to that from 2016. Even if its principles, construction and some of the elements are identical, the rabbits in it are different. None of them is or could be Josephine, but each of them offers possibility of a new story. For this reason, Josephine is not present, neither up- nor downstairs, other than within various works at the upper floor.

Josephine is a work of art in the form of a living rabbit. ‘While alive, a work of art, and when dead, a part of art history’. In this sense, it is a symbolic re-enactment of art history and its contingency. Through its form, it continuously questions the paradigm of art, which is thus redefined in the context of its own, and other works of art around it. Throughout Josephine’s life, various works of art are being made, within which the rabbit functions as an incorporated work of art and a symbol.
Josephine is, of course, on the very basic level, the symbol and embodiment of life, ever fleeing and never truly tangible. And it is thus she can never be fully contained within man-made systems: i.e. this work of art is neither appropriate for the museum or the art space, nor other virtual realities of all sorts. For a virtual reality, a system (also called program) has to be created. To create such a system the [created] thing has to be within the scope of our complete understanding and prediction. This is why Josephine can never become contained within such context; because Josephine as a living being continuously escapes reason.

There is strict meaning behind the divisions of the space and placement of the works. The ‘reading’ is meant to occur in an order predetermined by the artist (who once again becomes a curator for his work). The entrance of the gallery leads to the first half of the ground floor space, elevated, and separated from the rest by a barrier and some steps. The works composed at this ‘entrance’ refer to the always interdependent structures of power and history: Art cage (2017), a reference to which can be found later in the film Empire (2017) in the lower part of the ground floor, applies a conceptual value to the whole space; Shadows and other signs of life (2017) – trails of Josephine forming expressionist compositions are hanging over the text of Novalis (the selection of the text is a curatorial work of Julian Schindele) and thus providing the historical context and further means of reading of the proposed symbolic entity; 喜坑 (Auspicious hole) (2019) consisting of a green neon text and a photographic wallpaper of a fragment of one of the images taken from the Source book. Art in the 21st century (book containing 81 images of Josephine).

If the upper (subjecting) part of the ground floor presents context of history and power, the lower (subjected) part contains works concerning impermanence, fragility of life and freedom of an individual.
One of the images from Source book. Art in 21st century was used to create large format photographic print Stills from ‘Pixelated Venus’ (2017). The very same image is then repeated (but without the ‘subtitled’ text) as a low quality billboard print which fills the whole wall on which the print hangs. On the very same wall the phrase written in pink neon over the billboard image reads: ‘looking for meaning in history’. This work, hanging on the opposing corner to that where the Art cage is placed, comes from another project (Reading history). Here it further establishes the existential context of the Josephine project, at its base, as the statement handwritten by the artist, is simply meant to be taken as looking for meaning whatsoever (and so for instance the meaning of life). As much as one cannot claim and position one’s identity without the context (of history), an object cannot become a work of art, without a context (of an artistic practice, history, museum or gallery space, etc.). And so looking for meaning is incorporated into a practice of creation of objects, whose inherent quality we always look out for, is precisely, the meaning (we ask ourselves what does this or that art mean). And in case of this project and of Martychowiec’s practice, the meaning can be found and created only through positioning oneself, or one’s creations, within history.

From this point, one proceeds down the stairs, underground. In the stairway, an image of a text reading ‘Once it’s gone’ – Do you believe in art? (2015) is being permanently projected from a photographic slide, an art medium, which in that specific setting is destined to become obliterated (by fading away) before the exhibition is over and so before the work could have a chance of becoming historicised.

Beuys wrote in the context of his hare:
‘The hare incarnates himself into the earth, which is what we human beings can only radically achieve with our thinking: he rubs, pushes, and digs himself into Materia (earth); finally penetrates (hare) its laws, and through this work his thinking is sharpened then transformed, and becomes revolutionary.’

And so the visitor pushes underground towards the re-enacted installation to face an unusual combination of elements: a quaint metal lever of some sort, rabbits freely hopping about the space and the whole scene lit and titled with a neon reading ‘Do you believe in art?’.

Art is not ‘a celebration of an external rite, which has its truth elsewhere (in faith and dogma). It is only in committing this absolutely performative action hic et nunc, which each time realises that which it signifies, that [art] can find its life in reality’ (G. Agamben)

One of the neon works from the daily questions series plays an important role here because the quality of questions is not finite like that of statements. Respectively, the quality of belief is not finite like that of understanding. After the readymade, what determines the status of a thing as a work of art, after all, is the belief, and so the question: Do you believe in art? In a sense, the metal lever has all qualities of a classical work of art. But are we content to take it as such after all that has been presented and said?
Of course, at this point none of the rabbits within the installation have any more value than as they are ‘hic et nunc’. But the same could have been said about Josephine some years ago.

Suddenly, the peaceful scene is interrupted with a sound of some words in classical Chinese. Their meaning: ‘The divine root conceives, its source revealed; Mind and nature nurtured’.
The artist brings back Beuys’s ‘rabbit’ and lets it live (after all the rabbit is a symbol of life and rebirth). The living rabbit becomes a work of art, impossible to sustain within existing system of the museum, art or virtual reality. It becomes a symbolic entity within the artistic system of signs. And the rest is history.

The underground installation becomes certain culmination of the exhibition; it is the symbolic source, the beginning which must be reached after overcoming both the structures of power, history and our fragility and necessary in order to understand them. For humans, this incarnating transgression is achieved within a conceptual process, which Beuys compares to the hare digging itself into the ground, so it can be ‘reborn’, so the life can go on (interestingly, from the zoological perspective it is the rabbits, not the hares, who dig warrens, and live underground). And the life can only keep on going precisely in the act of constant ongoing conceptual reinterpretation, revaluation, re-establishment. This is how looking for meaning in history should be understood in the context of this specific artistic practice.

Creation of the system constituting the world, is what the 81 symbolic battles in Journey to the West, classical Chinese novel, were meant to signify. The text which can be overheard in classical Chinese is precisely fragment of the opening poem of the mentioned novel. This reference to the Journey to the West gives another hint towards the reading of the exhibition as a whole. It is not a sole presentation of an individual project but a conceptual arrangement positioned within a large structural series of self-curated cycles, where the artistic elements become symbolic and symbols are turned into works of art. This historiographic practice places modernity at the centre of its contemporary discourse. The cycles arranged in order are: What remains the poets provide, Tears of Iblis and Journey to the West, each of which prepare ground in their historical commentary before a new system of signs and symbols can be proposed and established. Journey to the West is the most complex and the final part.

And so in the Journey to the West (in the original story, the monk and his companions travel to the West, meaning India, which is the source of Buddhism) Josephine transgresses the constraints of power: of her cage (institution) and historical modernity, freely competing with Klein’s scale of the man or the Black Square.
So, the symbolic Black Square framed by a blue line appearing upstairs, could be taken here as a symbol of modernity with its inevitable conclusion: destruction of established tradition only in order to inevitably establish a new one and remain at its centre. Josephine thus is meant to become the opposing force to the black square, or perhaps the whole modern tradition, simply as a black and white rabbit.
The Black Square in its attempt at destruction of the Icon was destined to simply replace it. It thus became a new symbol and source of a new materialistic myth, which due to its quality has remained materialised. One visit to the actual physical object makes one realise it actually exists within the materialist reality, that it is just a painting, and this material presence thus shatters its myth. On the other hand, Josephine does not offer such possibility. Once established, her myth will remain, precisely because she is destined to disappear, and nothing can possibly prevent it. Josephine is then what remains (following the What remains the poets provide) through the various other works of art which point to her and which introduce Josephine’s myth. She is the source (in the same sense as the Black Square became the symbolic source of creation and the new materialist holy).

What can then survive the work of destruction of the oversaturation and overproduction of contemporary modern culture? Now, at the time when everything is attainable in the abundance of internet, when technology can reconstruct anything and the institutions maintain countless works of art on a mass scale. Which of these works will be able to avoid destruction of their myth? Only a work of art as a living being, with its impermanence and destined unattainability, can create an indestructible myth and thus survive the work of destruction in the digi-materialistic era. 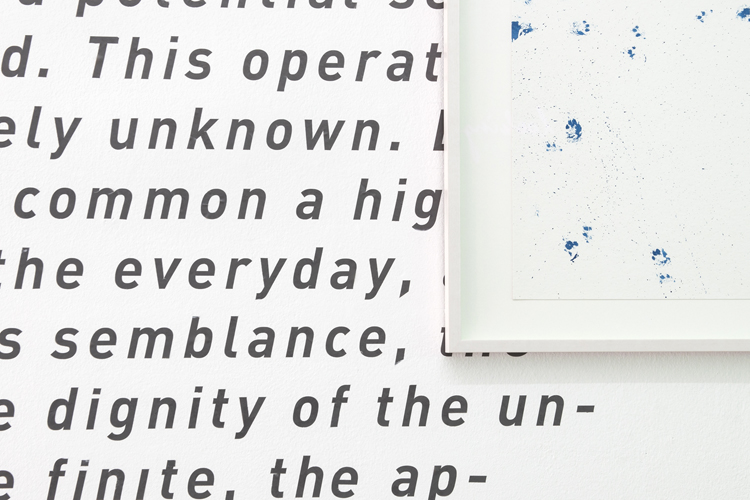 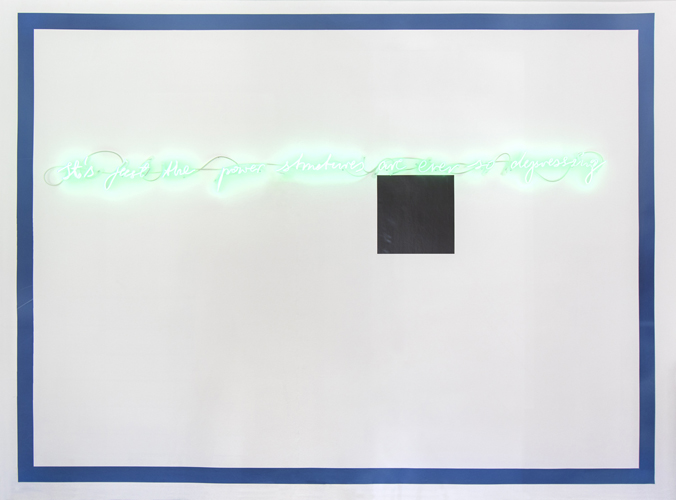 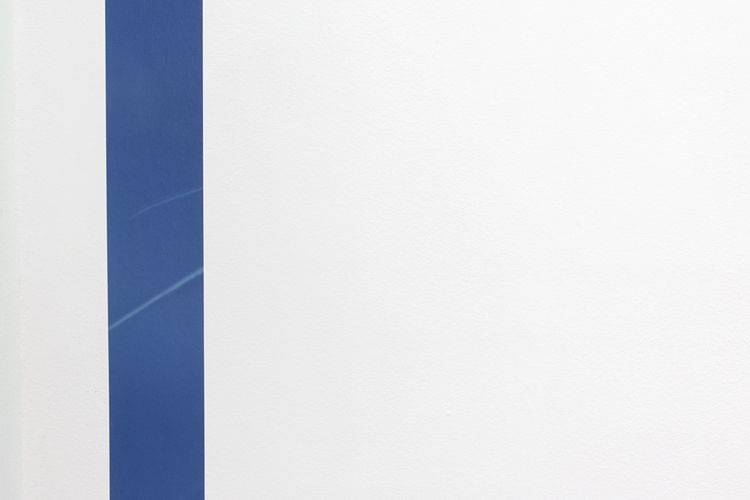 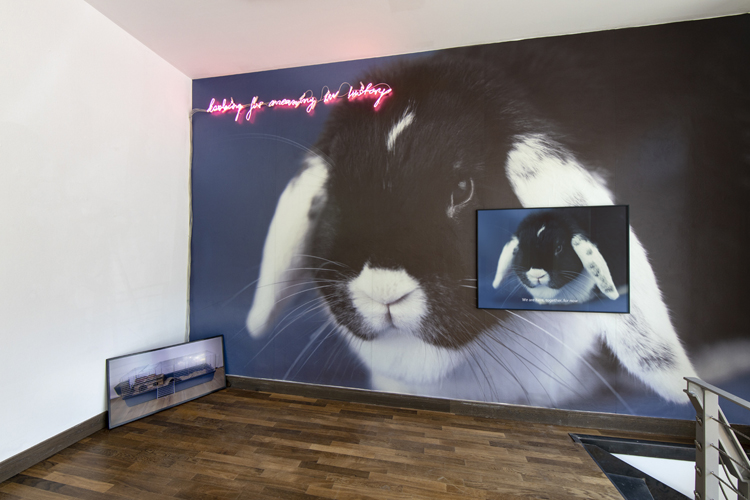 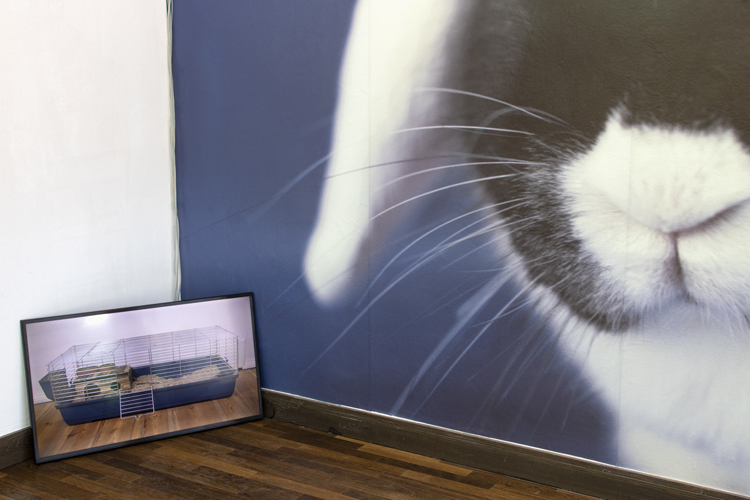 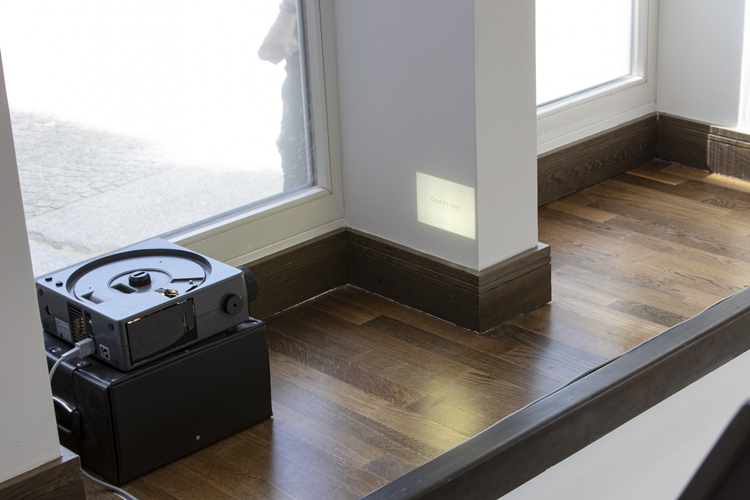 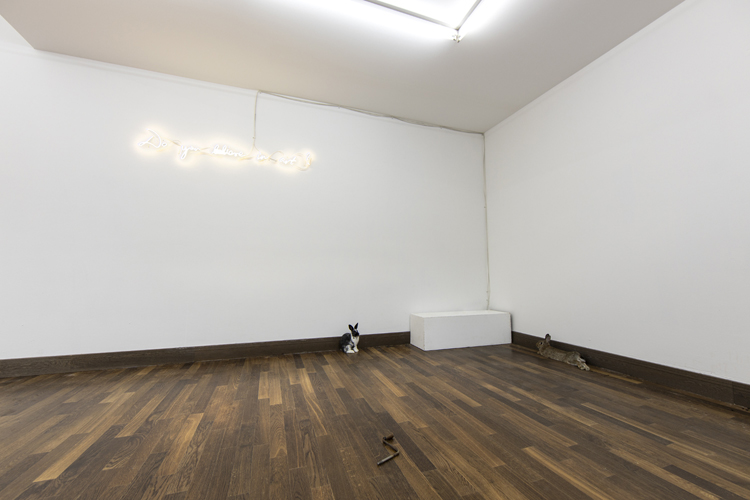 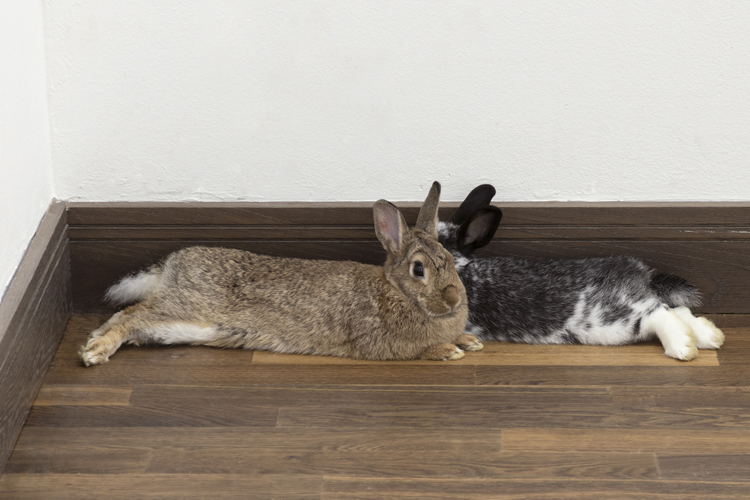 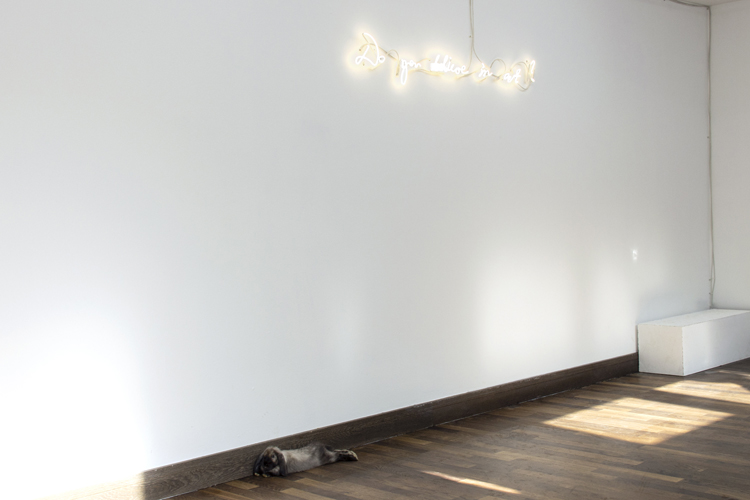 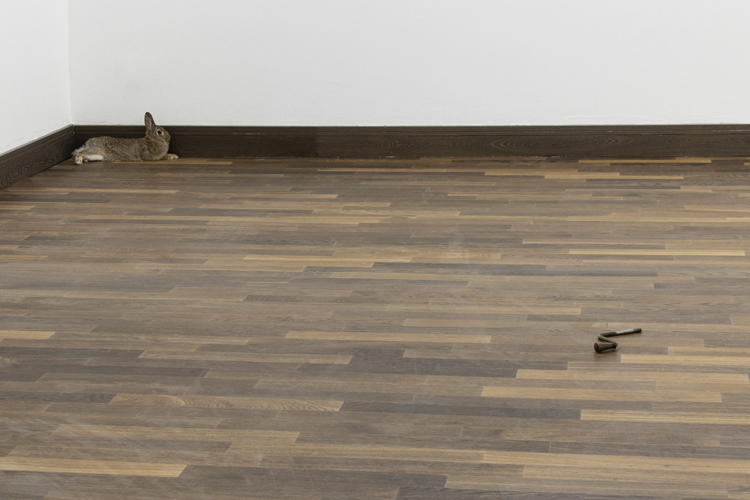 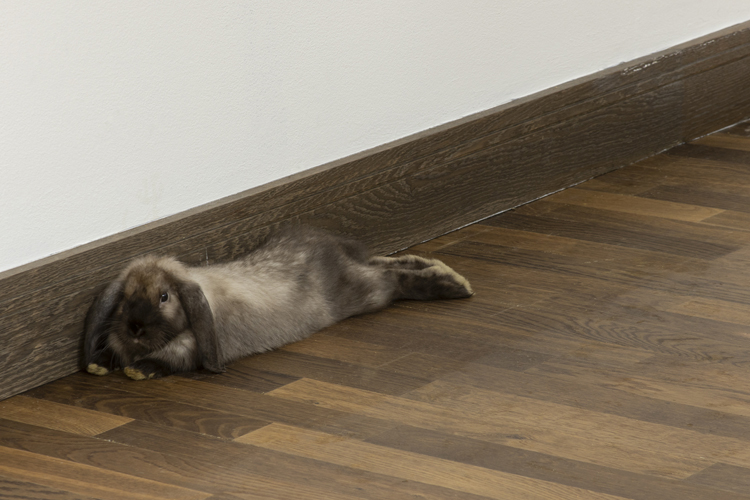